The idea for Tizio grew out of a conversation in 1970 between Artemide founder Ernesto Gismondi and Richard Sapper, friends and sailing friends, about the need to design a lamp that would perfectly illuminate the work surface with a beam of light always directed over the user's hand.

Richard Sapper, with the technologies of the day, designed a lamp that had a wide reach but at the same time was also space-saving with a transformer at the base that gave stability without having to use a clamp and with a light arm structure kept balanced at all times by counterweights.

Thus in 1972 a lamp that helped make Artemide's history, Tizio, went into production. Since then till today a symbol of quality, functionality and elegance.

"When we presented it, there was nothing like it on the market, it was revolutionary. Tizio is beautiful in any different position, it is a harmonious object in all its parts, you move it with one hand and it is always extremely precise. It is not that we don't change anything over the years because we can't, we don't change anything because that's the way it is."

The counterweight system in the first study model was made with jam jars that Richard Sapper filled and emptied with water, so he managed to define the right weight to maintain the perfect balance.

The rod with the red ball present on the head was added only later to enable distribution in Denmark.

In fact, the Danish government asked to add a system that would prevent the lamp head from touching the supporting table top as it could burn the surfaces.

Another element that makes this design icon stand out is the absence of cables to carry electricity from the base to the head, in fact this runs through the arms and joints thanks to a low voltage (12V) that does not create problems of shock in case of contact; this allows to have a slender lamp without the limitation given by the cable as well as a minimal and clean design.

The joints between the arms are actually classic push buttons, preventing, in case of a fall, a possible breakage of the lamp.

The name Tizio comes from the genius of Ernesto Gismondi who, having realized the potential of the project and the skill of Richard Sapper, thought he could convince him to create Caio and Sempronio as range extensions as well.

In the following years were created different variants starting from the smaller, 35 and Micro, which were less bulky and easier to fit into different contexts, right up to the Plus, equipped with a head that could also be tilted obliquely.

Thanks to a pedestal, Tizio, can also become a floor lamp.

For the 30-year anniversary, was made the first special autographed and numbered version, the Tizio X30.

In 2008, the LED version, currently in production, was introduced, which keeps the iconic shape unchanged but is distinguished by the absence of the rod on the head and the power button in green instead of red.

On the 50-year anniversary of production, Tizio wears red with a new special version limited to 5000 pieces, and the white version comes back into the catalog.

Tizio 50th is characterized by Richard Sapper's favorite red and a silkscreen print with his signature and production number. 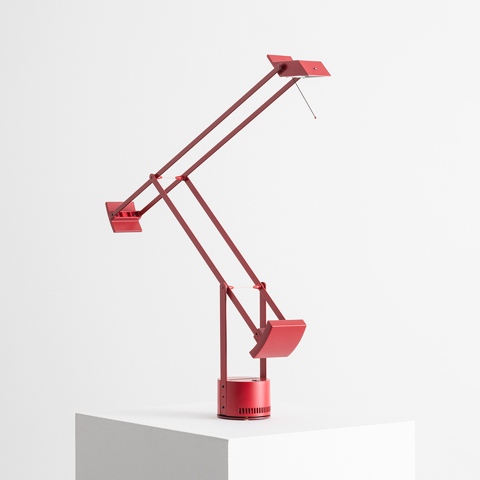